The fossils are estimated to be about 518 million years old, and are particularly unusual because the soft body tissue of many creatures, including their skin, eyes, and internal organs, have been “exquisitely” well preserved. 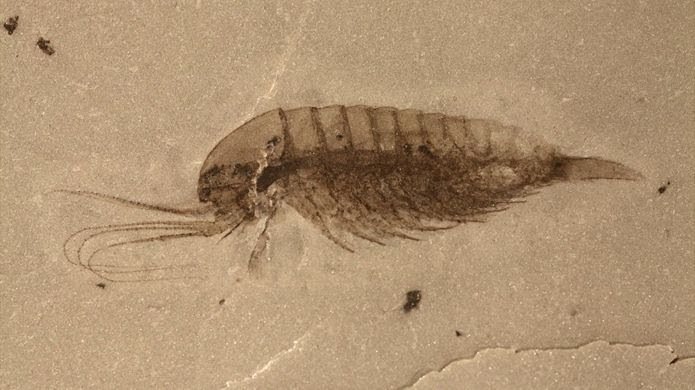 Palaeontologists have called the findings “mind-blowing” – especially because more than half the fossils are previously undiscovered species.

Paleontologists found thousands of fossils in rocks on the bank of the Danshui river in Hubei province in southern China, where primitive forms of jellyfish, sponges, algae, anemones, worms and arthropods with thin whip-like feelers were entombed in an ancient underwater mudslide.

The creatures are so well preserved in the fossils that the soft tissues of their bodies, including the muscles, guts, eyes, gills, mouths and other openings are all still visible. The 4,351 separate fossils excavated so far represent 101 species, 53 of them new.

The fossils, known as the Qingjiang biota.

Fossils of soft-bodied creatures like jellyfish are extremely rare

More than 20,000 specimens were collected, and a total of 4,351 have been analysed so far, including worms, jellyfish, sea anemones and algae.

Scientists say they have discovered a “stunning” trove of thousands of fossils on a river bank in China.

They will become a “very important source in the study of the early origins of creatures”, one of the fieldwork leaders, Prof Xingliang Zhang from China’s Northwest University, as reported by BBC.

The discovery is particularly remarkable because “the majority of creatures are soft-bodied organisms like jellyfish and worms that normally stand no chance of becoming fossilised”, Prof Robert Gaines, a geologist who also took part in the study, said in an email to the BBC.

The majority of fossils tend to be of hard-bodied animals, as harder substances, like bones, are less likely to rot and decompose.

The Qingjiang biota must have been “rapidly buried in sediment” due to a storm, in order for soft tissues to be so well preserved, Prof Zhang says.

Scientists are especially excited by the jellyfish and sea anemone fossils, which Prof Gaines describes as “unlike anything I have ever seen. Their sheer abundance and their diversity of forms is stunning”.

Meanwhile, Prof Allison Daley, a palaeontologist who was not part of the study but wrote an accompanying analysis in Science, told BBC’s Science in Action programme the find was one of the most significant in the last 100 years.

“It blew my mind – as a palaeontologist I never thought I’d get to witness the discovery of such an incredible site.

“For the first time we’re seeing preservation of jellyfish – [when] you think of jellyfish today, they’re so soft-bodied, so delicate, but they’re preserved unbelievably well at this site.”

The research team are now documenting the remaining specimens, and conducting more drilling in the region to find out more about the ancient local ecosystem, and the fossilisation process.

Prof Zhang says he looks forward to studying “all these new species – I’m always excited when we get something new”.
The fossils are from the Cambrian period, which began 541 million years ago and saw a rapid increase in animal diversity on Earth.

Prof Gaines hopes his work will also strike a chord with modern readers.

“Biotic diversity today is something that we take for granted, even though there are indications that extinction rates are sharply increasing.

“Yet most of the major animal lineages were established in a singular event in the history of life, the Cambrian explosion, the likes of which have never been seen before or after. It also reminds us of our deep kinship to all living animals.”