US-backed forces are celebrating ‘victory’ after they captured a key ISIS encampment and reduced the terror group’s ‘caliphate’ to a few hundred square yards of bombed-out scrapyard in Syria, As reported by Daily Mail.

Officials from the Syrian Democratic Forces (SDF) were seen singing and dancing and giving ‘V for victory’ signs as they returned from the frontline in Baghouz in the country’s east.

The extremists had retreated in to a tiny parcel of land with some reportedly having used their own children as human shields. 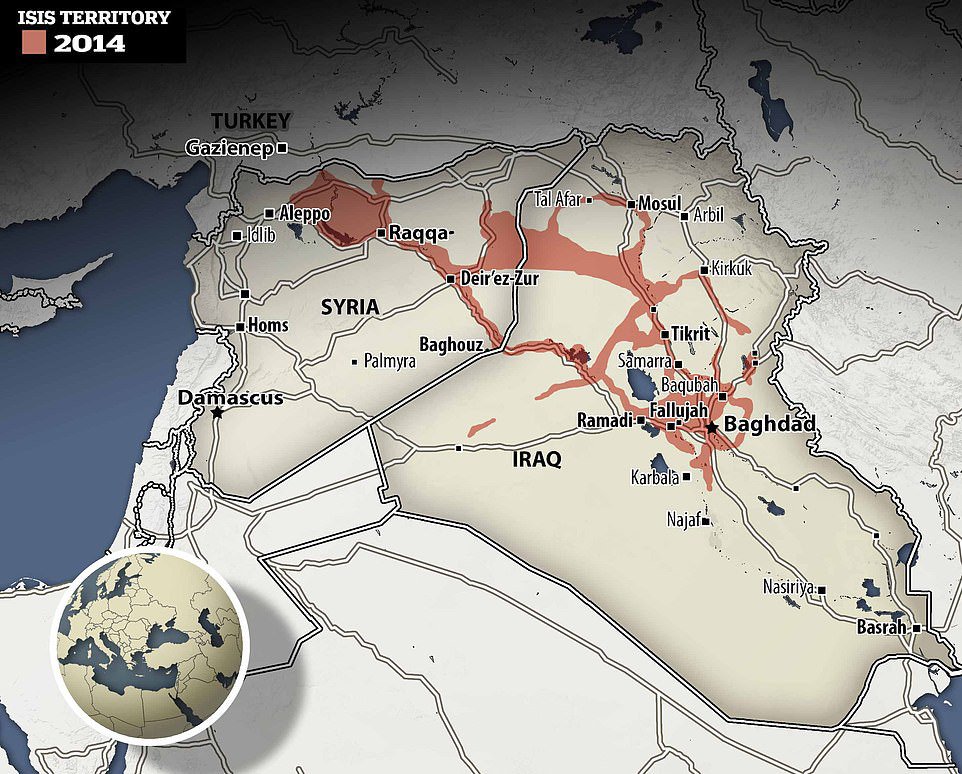 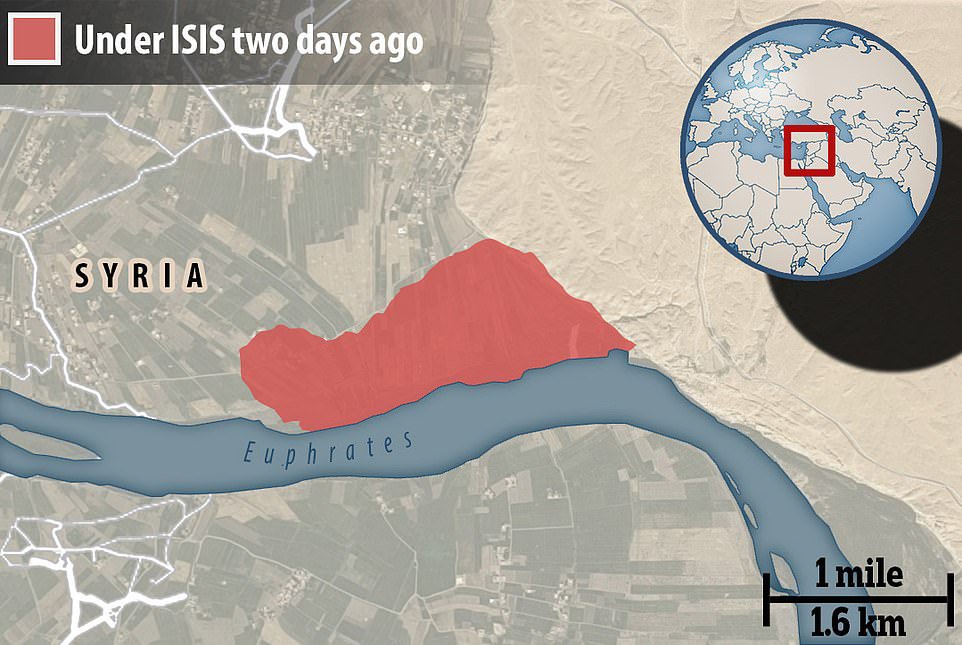 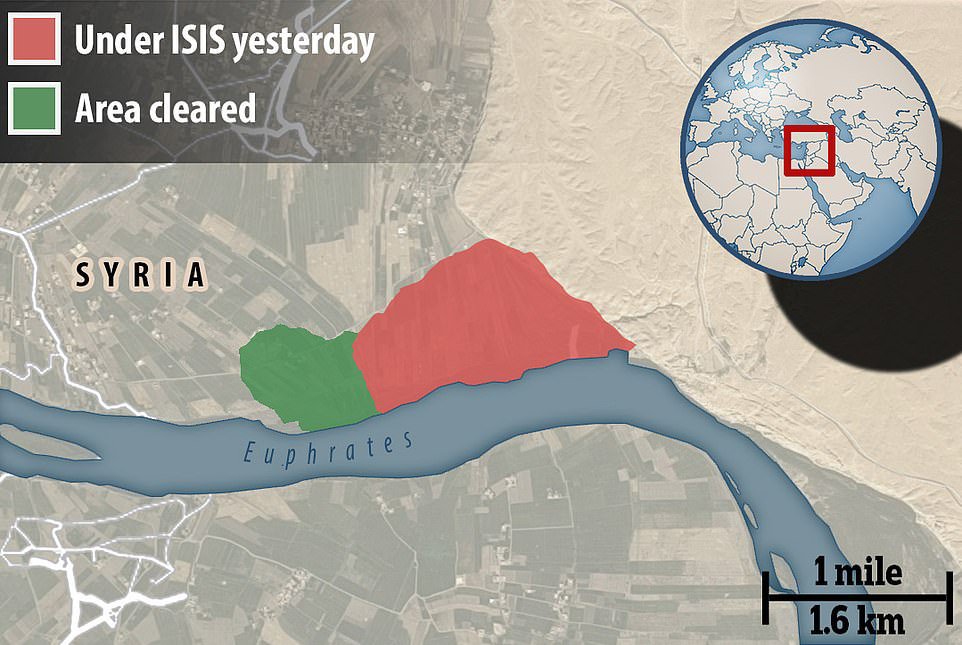 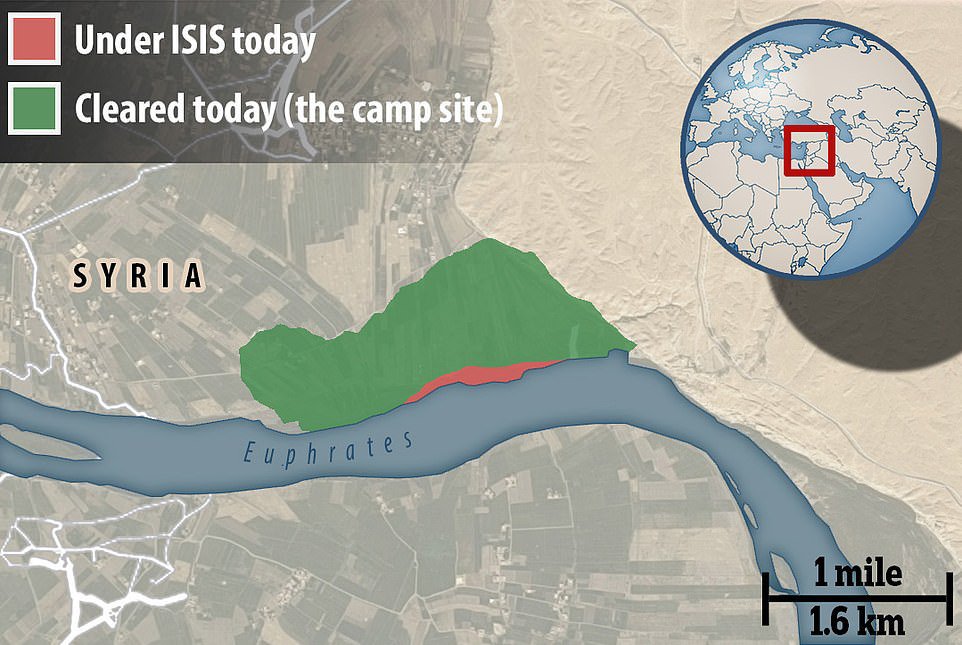 Pictures show the burning remains of cars along the banks of the Euphrates river where ISIS fanatics have been desperately digging in over the last few months. Hundreds of militants surrendered overnight, an SDF spokesman said, signalling the terror group’s collapse after months of stiff resistance. 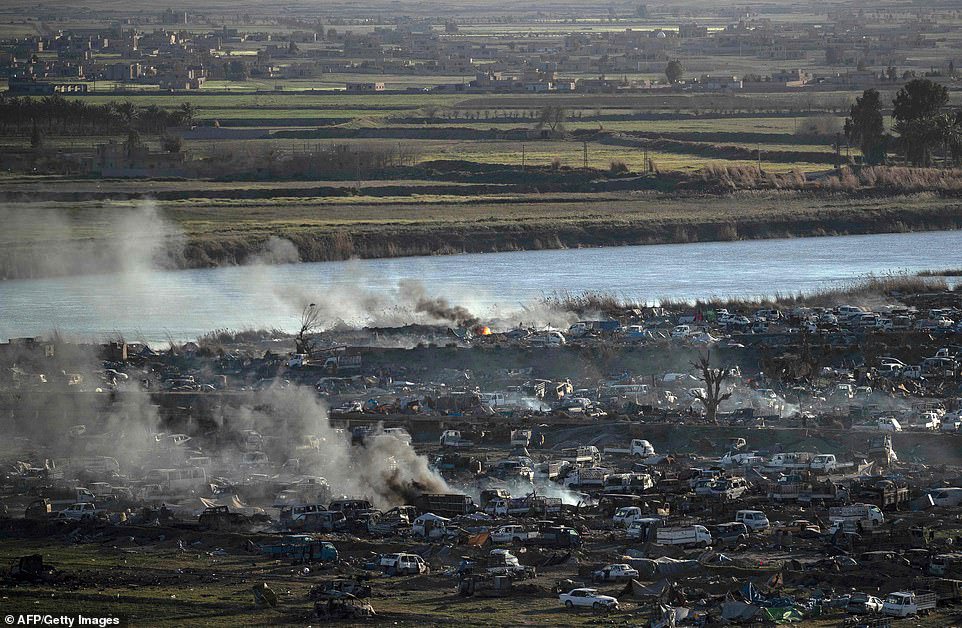 Reduced to a burning scrapyard: ISIS fighters and followers have been steadily forced back to Baghouz after years of retreats in the face of military campaigns by an array of foreign and local forces. Pictures show the bombed-out remains of cars in the terror group’s last stronghold 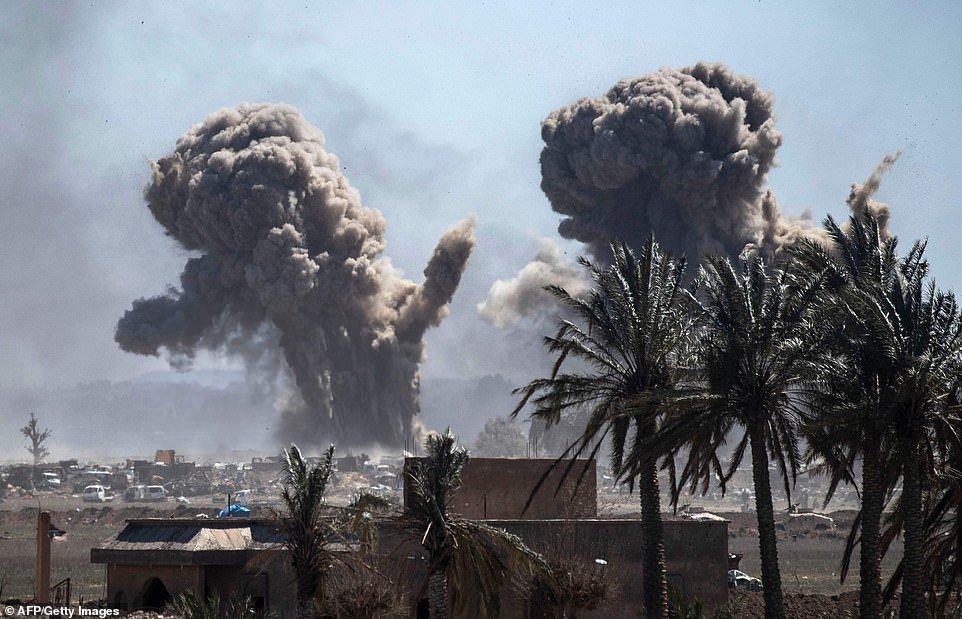 Fighting has been intense as SDF fighters move in on ISIS positions in the village of Baghouz. Pictures show smoke rising over the enclave on the banks of the Euphrates in eastern Syria 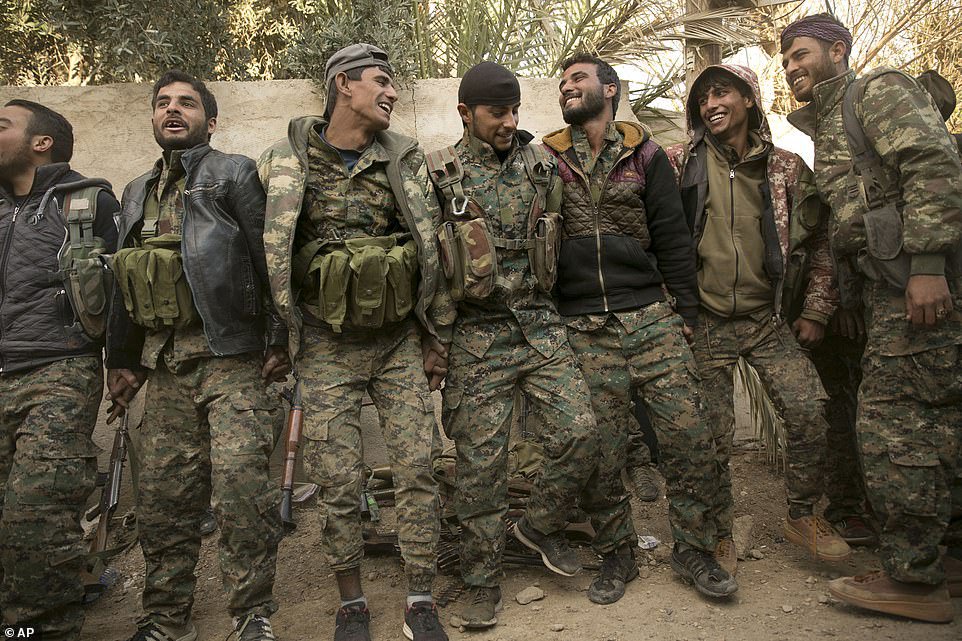 U.S.-backed Syrian Democratic Forces (SDF) fighters sing and link arms as they celebrate their territorial gains over ISIS this afternoon 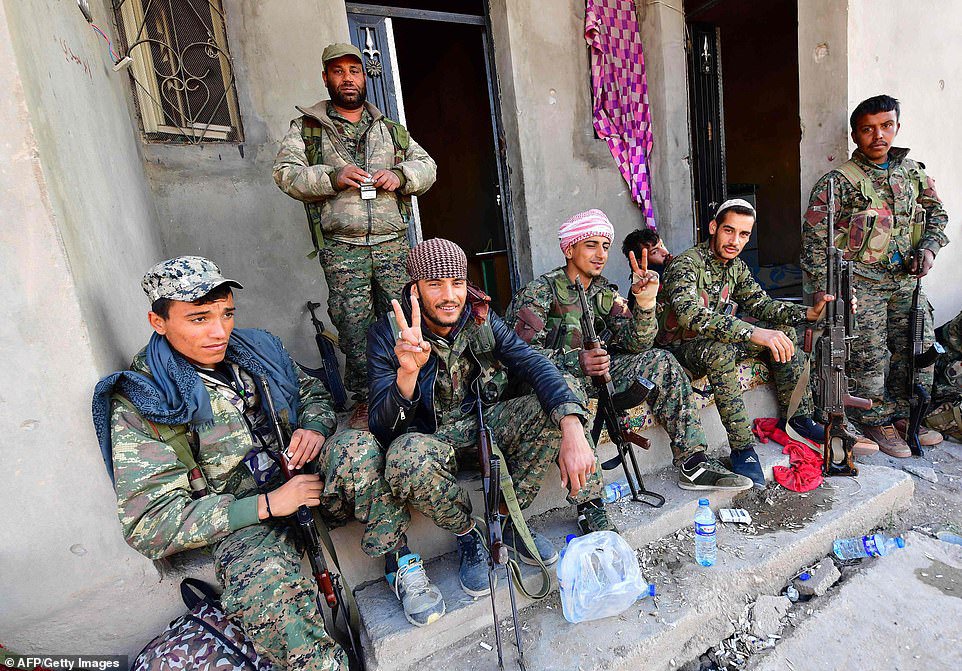 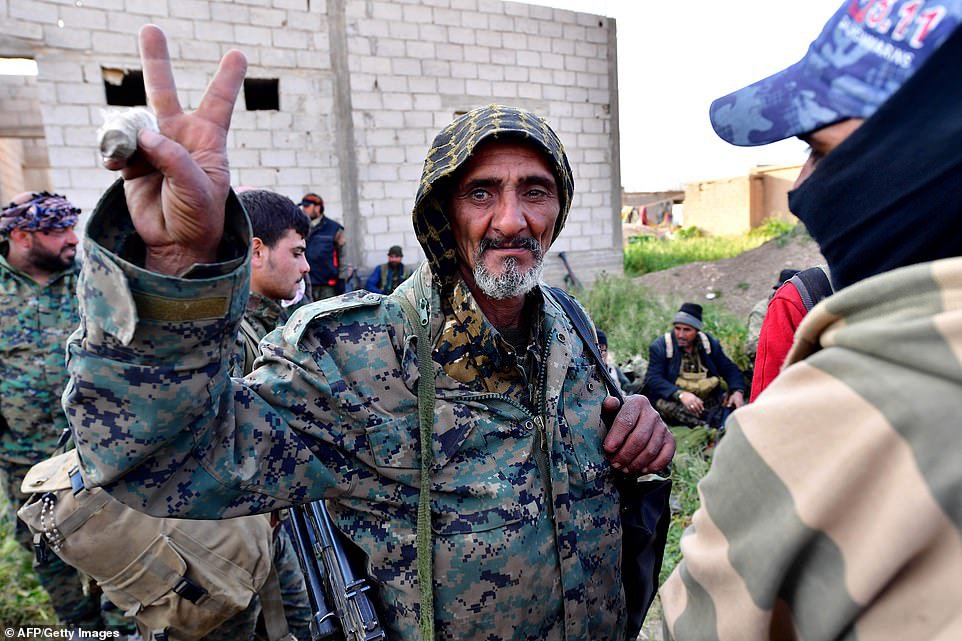 The SDF captured hundreds of wounded militants when it overran the camp on Tuesday, Bali said. It also captured 157 mostly foreign fighters. An SDF fighter makes a ‘V for victory’ sign today 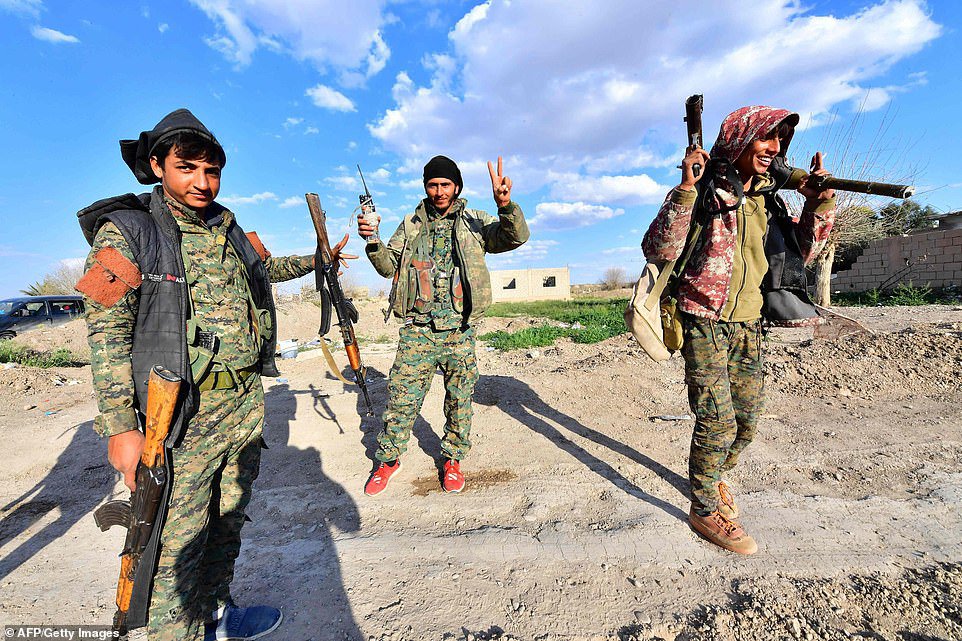 U.S.-backed Syrian forces on Tuesday seized control of an encampment held by the Islamic State group in eastern Syria, after hundreds of militants surrendered overnight, a spokesman said, signaling the group’s collapse after months of stiff resistance

Meanwhile, the spokesman, Mustafa Bali said the SDF had captured a group of alleged terrorists suspected of being behind a suicide attack in northern Syria that left four Americans dead earlier this year. Bali said the suspects were captured following technical surveillance. He did not elaborate on the number of suspects or when they were captured.

The Americans were killed in a suicide bombing in January in the town of Manbij that was claimed by ISIS. In a statement posted on Twitter on Tuesday, he said the outcome of the ongoing investigation will be shared at a later time.

The taking of the ISIS camp was a major advance but not the final defeat of the group in Baghouz, the last village held by the extremists where they have been holding out for weeks under siege, according to Bali. Still, fighters from the force were starting to celebrate anyway.

‘I’m happy it’s over. Now I know my people are safe,’ said a fighter who identified himself as Walid Raqqawi who fought in the camp Monday night. He said he is returning to his hometown of Raqqa to rest. Comrades from his unit sang and danced in celebration at an outpost in Baghouz, all saying they were looking forward to going home.

Hardened militant fighters holed up in the encampment have been mounting a last-stand defence of the enclave, all that is left of ISIS’s self-proclaimed ‘caliphate’ that once spanned a third of both Syria and Iraq.

The militants have been putting up a desperate fight, their notorious propaganda machine working even on the brink of collapse.

On Monday, ISIS issued a video showing its militants furiously defending the encampment, a junkyard of wrecked cards, motorcycles and tents. In the footage.
They shoot nonstop with AK-47s and M-16s from behind trucks, vehicles and sand berms. A group of children could be seen at one point amid the fighting.

‘My Muslim brothers everywhere, we did our best, the rest is up to God,’ a fighter said to the backdrop of black smoke rising from behind him.

The SDF captured hundreds of wounded militants when it overran the camp on Tuesday, Bali said. It also captured 157 mostly foreign fighters.

Asked earlier by Reuters how long it would take to defeat the remaining jihadists, Bali said he expected the operation to end ‘very soon’. Some remaining militants had fallen back to the bank of the nearby Euphrates River, he said.

‘The battles are not yet over,’ he said. ‘Some of the terrorists have taken their children as human shields. There are intermittent clashes.’

ISIS fighters and followers have been steadily forced back to Baghouz after years of retreats in the face of military campaigns by an array of foreign and local forces. 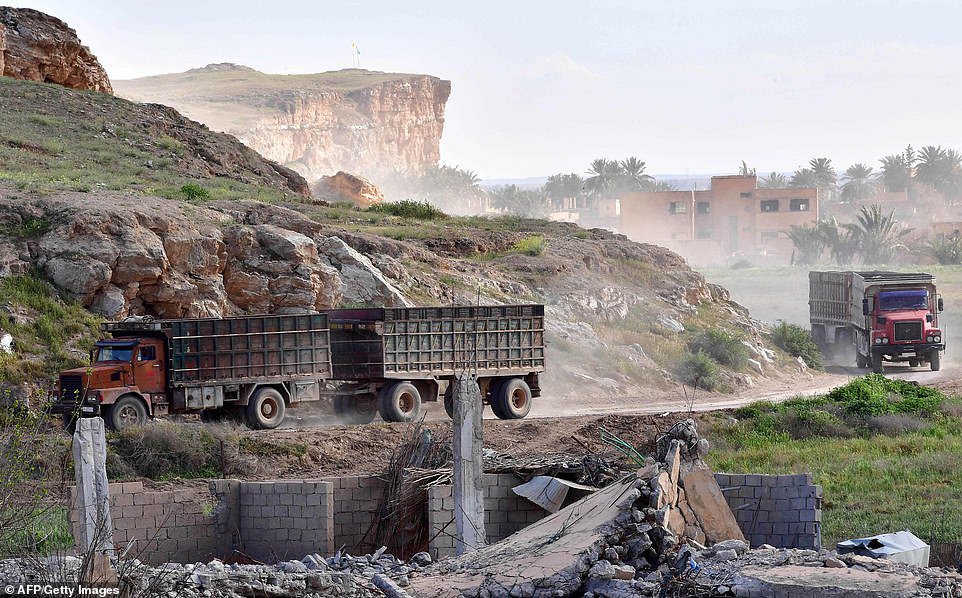 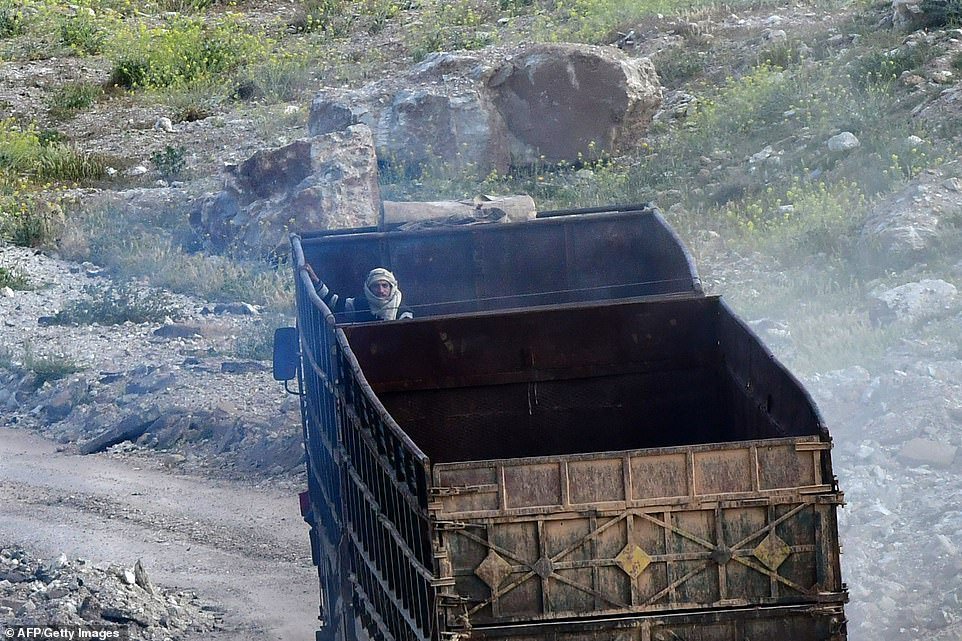 A man stands in the back of a truck used by the SDF to evacuate people from Baghouz today. SDF officials say they are close to driving the terror group out of the village 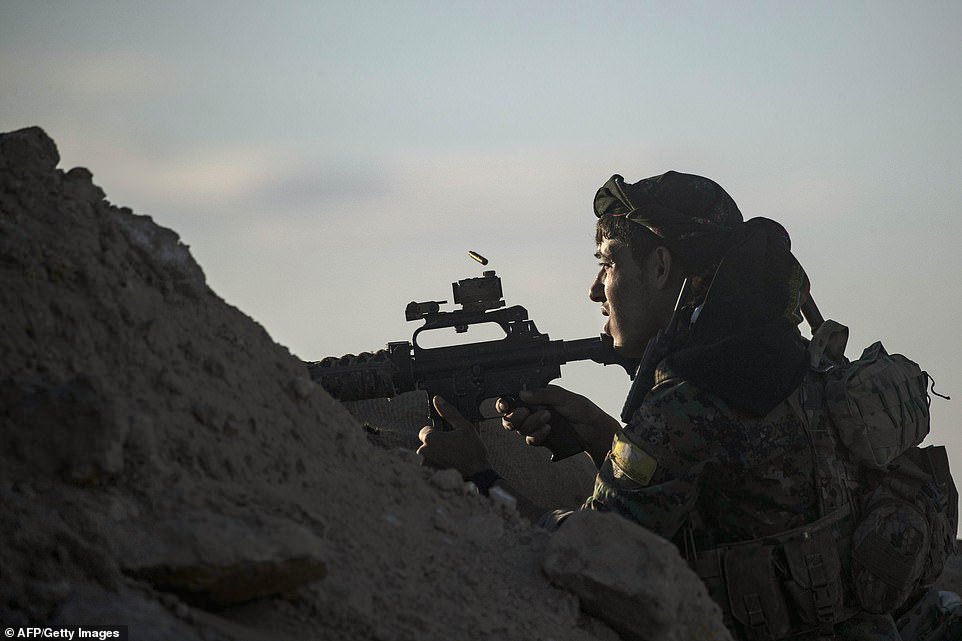 The area held by ISIS in Baghouz is the last pocket of territory in Syria controlled by the extremist group, which once held a vast area of Syria and Iraq, calling it an Islamic ‘caliphate’. Pictured: An SDF fighter takes aim during the battle for Baghouz

The complete fall of Baghouz would mark the end of the ISIS’s self-declared territorial ‘caliphate,’ which at its height stretched across much of Syria and Iraq.

For the past four years, U.S.-led forces have waged a destructive campaign to tear down the ‘caliphate.’ But even after Baghouz’s fall, ISIS maintains a scattered presence and sleeper cells that threaten a continuing insurgency.

The battle for Baghouz has dragged on for weeks – and the encampment has proven a major battleground, with tents covering foxholes and underground tunnels.

The siege has also been slowed by the unexpectedly large number of civilians in Baghouz, most of them families of IS members. Over past weeks they have been flowing out, exhausted, hungry and often wounded. The sheer number who emerged – nearly 30,000 since early January according to Kurdish officials – took the Kurdish-led SDF by surprise.

In the last two weeks, many IS militants appeared to be among those evacuating. But SDF commanders have stopped speculating when the battle may finally be over. Commanders say they don’t know how many more may still be left, hiding in tunnels beneath the war-scarred village.

In the seizure Tuesday of the encampment, hundreds of wounded and sick militants were captured and have been evacuated to nearby military hospitals for treatment, Bali, the SDF spokesman, said in a Twitter post. Still, he cautioned, ‘this is not a victory announcement, but a significant progress in the fight.’

There were conflicting reports from SDF commanders on the ground about the extent of the IS surrender. 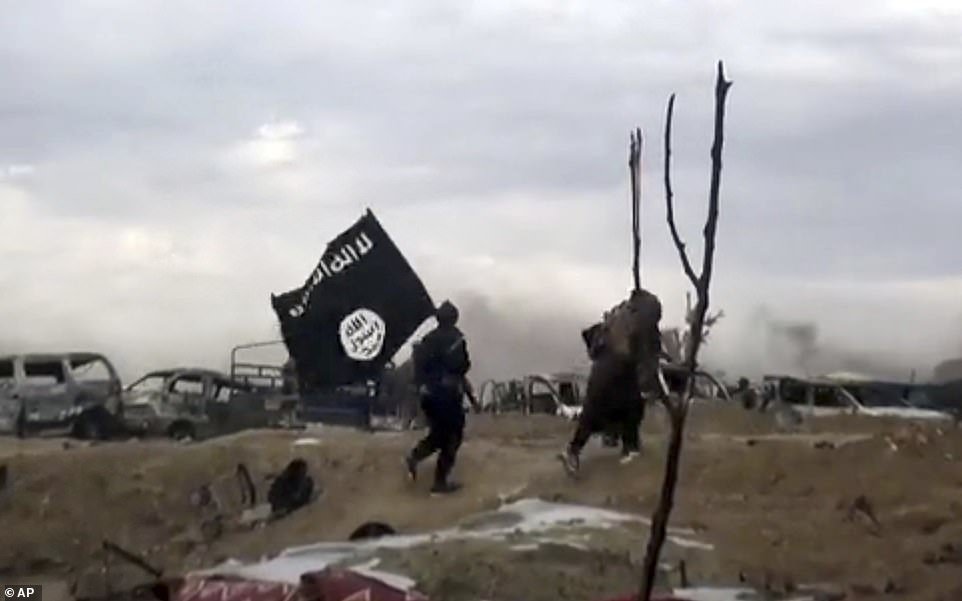 The extremists are retreating in to an ever shrinking parcel of land at Baghouz in the country’s east – with some now said to be using their own children as human shields. Pictured: An ISIS fighter waving the jihadists’ black and white flag in Baghouz on Monday 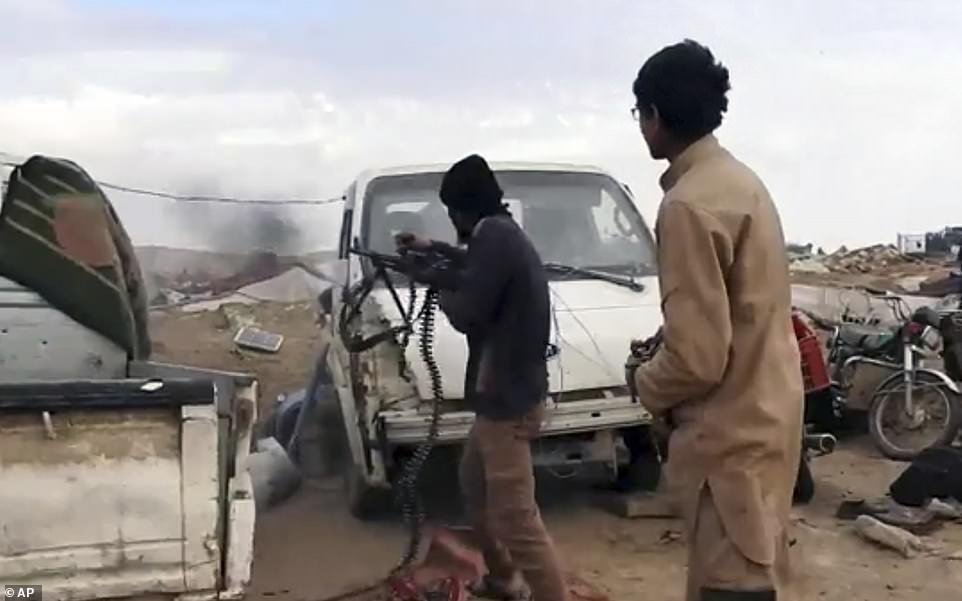 Over the past two months, more than 60,000 people have poured out of the dwindling enclave, nearly half of whom surrendered as ISIS supporters, including some 5,000 fighters, according to the SDF. ISIS released this image of fighters firing their weapons from inside Baghouz

Commander Rustam Hasake told The Associated Press that SDF forces advanced on four fronts Monday night and were inside the camp when the last IS fighters surrendered at dawn. He said the last fighters were pushed out of the camp and were now in an open patch of land by the Euphrates River and were being processed and detained.

Another commander, however, said some IS militants continue to hold a tiny area in an open patch of land in the village, outside the encampment.

AP journalists in Baghouz reported sporadic gunfire echoing in Baghouz and jets circling overhead. At a command post in Baghouz, a Humvee pulled up and unloaded weapons captured from IS on Tuesday, including sniper and hunting rifles, pump action shot guns and grenades and ammunition. 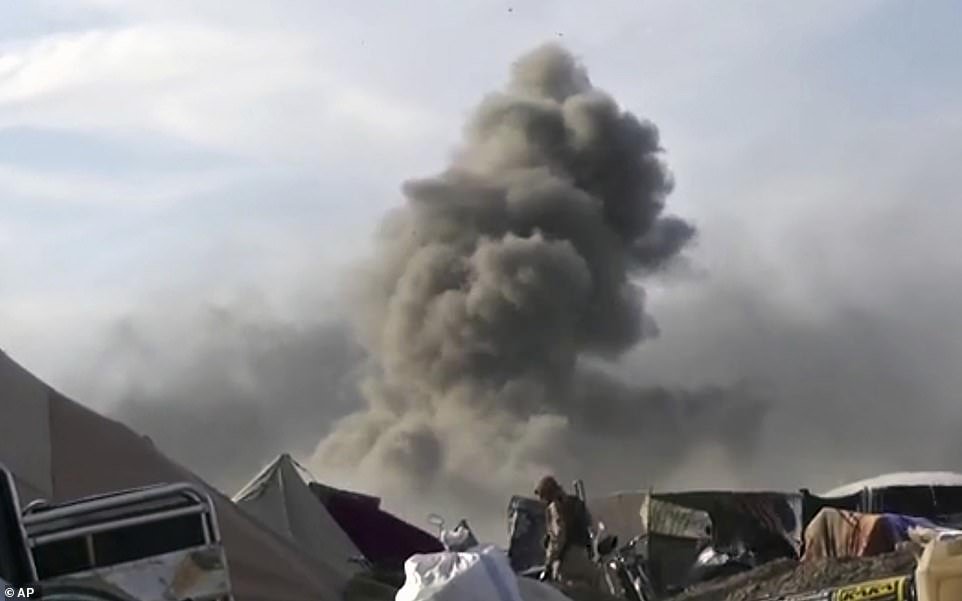 The U.S. military has warned that ISIS may still count tens of thousands of fighters, dispersed throughout Iraq and Syria, with enough leaders and resources to present a menacing insurgency. The terror group released video (pictured) purportedly showing fanatics fighting in Baghouz this week

Five trucks hauling 10 trailers full of people were seen coming out of Baghouz. A child could be heard wailing from inside one of them. At least 100 people, nearly all of them children, have died in the truck trips from Baghouz on the way to a camp in northern Syria, or soon after reaching it, according to the International Rescue Committee – a sign of how miserable conditions were inside Baghouz during the siege as supplies ran out. 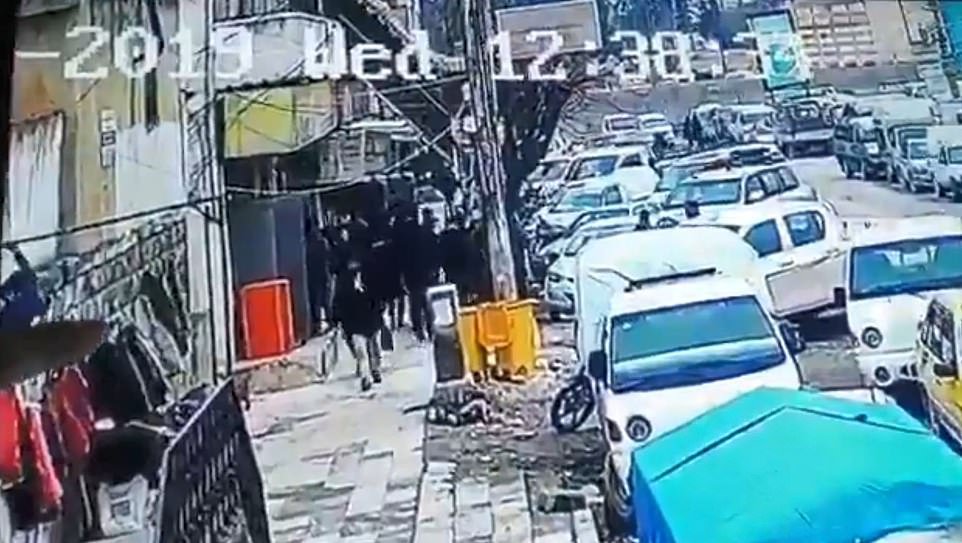 Bali, in a separate Twitter post Tuesday, said the SDF captured a group of suspects involved in a January suicide bombing that killed four Americans in the northern town of Manbij. He did not elaborate on the number of suspects or whether they were among the most recent militants to surrender.

ISIS claimed responsibility for the blast outside a popular restaurant in Manbij, which killed at least 16 people, including two U.S. service members and two American civilians. It was the deadliest assault on U.S. troops in Syria since American forces went into the country in 2015.

As they make their final stand, the IS militants have issued a string of statements this month claiming to have inflicted heavy losses on the SDF.

In an audio posted online Monday, the ISIS spokesman, Abu Hassan al-Muhajer, issued his first message in six months, calling for revenge attacks by Muslims in Western countries in retaliation for the shooting attack on two New Zealand mosques that killed 50 people.

He also ridiculed U.S. declarations of the defeat of the Islamic State group, calling the claim of victory a ‘hallucination.’

But SDF fighters celebrated as if the final collapse were imminent. At the SDF outpost in Baghouz, a commander danced with his soldiers. Fighters said remaining IS militants didn’t put up much resistance.

‘I tell the martyrs, it wasn’t for nothing. With God’s permission, we’ve finished Daesh.’