Asteroid Day (also known as International Asteroid Day) is an annual global event which is held on the anniversary of the Siberian Tunguska event that took place on June 30, 1908, the most harmful known asteroid-related event on Earth in recent history.

The United Nations has proclaimed it be observed globally on June 30 every year in its resolution. Asteroid Day aims to raise awareness about asteroids and what can be done to protect the Earth, its families, communities, and future generations from a catastrophic event.

The Tunguska event is the largest impact event on Earth in recorded history. Studies have yielded different estimates of the meteoroid’s size, on the order of 60 to 190 metres (200 to 620 feet), depending on whether the body was a comet or a denser asteroid.

Since the 1908 event, there have been an estimated 1,000 scholarly papers (most in Russian) published on the Tunguska explosion. In 2013, a team of researchers published analysis results of micro-samples from a peat bog near the center of the affected area showing fragments that may be of meteoritic origin.

Early estimates of the energy of the air burstrange from 10–15 megatons of TNT (42–63 petajoules) to 30 megatons of TNT (130 PJ), depending on the exact height of burst estimated when the scaling-laws from the effects of nuclear weapons are employed. However, modern supercomputer calculations that include the effect of the object’s momentum find that more of the energy was focused downward than would be the case from a nuclear explosion and estimate that the airburst had an energy range from 3 to 5 megatons of TNT (13 to 21 PJ). A newer finding suggests the explosive power may have been around 20–30 megatons.

The 15-megaton (Mt) estimate represents an energy about 1,000 times greater than that of the atomic bomb dropped on Hiroshima, Japan—roughly equal to that of the United States’ Castle Bravo (15.2 Mt) ground-based thermonuclear detonation on 1 March 1954, and about one-third that of the Soviet Union’s Tsar Bomba explosion on 30 October 1961 (which, at 50 Mt, is the largest nuclear weapon ever detonated).

It is estimated that the Tunguska explosion knocked down some 80 million trees over an area of 2,150 km2 (830 sq mi), and that the shock wave from the blast would have measured 5.0 on the Richter magnitude scale. An explosion of this magnitude would be capable of destroying a large metropolitan area, but, due to the remoteness of the location, no human fatalities were officially documented. Several reports have indicated that two people may have died in the event, but those deaths remain unofficial. The Tunguska event has helped to spark discussion of asteroid impact avoidance.

History behind the Day:

Asteroid Day was officially launched on December 3, 2014. In February 2014, Brian May, astrophysicist and guitarist for the rock band Queen, began working with Grigorij Richters, director of the film 51 Degrees North, the story of a fictional asteroid impact on London and the human condition resulting from such an event. May composed the music for the film. After screening the film at the 2014 Starmus Festival, Richters and May co-founded Asteroid Day in October 2014 which they officially announced during a press conference with Lord Martin Rees, Rusty Schweickart, Ed Lu, Thomas Jones, Ryan Watt and Bill Nye. The event was live streamed from the Science Museum in London, the California Academy of Sciences, New York and São Paulo.

More than 1M asteroids have the potential to impact Earth and through all the available telescopes worldwide, we have discovered only about one percent. The 100X Declaration calls for increasing the asteroid discovery rate to 100,000 (or 100x) per year within the next 10 years. “The more we learn about asteroid impacts, the clearer it became that the human race has been living on borrowed time,” remarked Brian May. “Asteroid Day and the 100X Declaration are ways for the public to contribute to an awareness of the Earth’s vulnerability and the realization that Asteroids hit Earth all the time.” Asteroid Day would the vehicle to garner public support to increase our knowledge of when asteroids might strike and how we can protect ourselves.”

The main three goals are:

1. Employ available technology to detect and track Near-Earth Asteroids that threaten human populations via governments and private and philanthropic organisations.

2. A rapid hundred-fold acceleration of the discovery and tracking of Near-Earth Asteroids to 100,000 per year within the next ten years.

3. Global adoption of Asteroid Day, heightening awareness of the asteroid hazard and our efforts to prevent impacts, on June 30 – With the United Nations recognition, this action item has been achieved.

In February 2016, Romanian astronaut Dumitru Prunariu and the Association of Space Explorers submitted a proposal to the Scientific and Technical Subcommittee of the United Nations which was accepted by the subcommittee and in June 2016 the United Nations Committee on the Peaceful Uses of Outer Space included the recommendation in its report. The report of the Committee was presented for approval to the United Nations General Assembly’s 71st session, which it approved on December 6, 2016.

In its resolution the United Nations declares “30 June International Asteroid Day to observe each year at the international level the anniversary of the Tunguska impact over Siberia, Russian Federation, on 30 June 1908 and to raise public awareness about the asteroid impact hazard.” 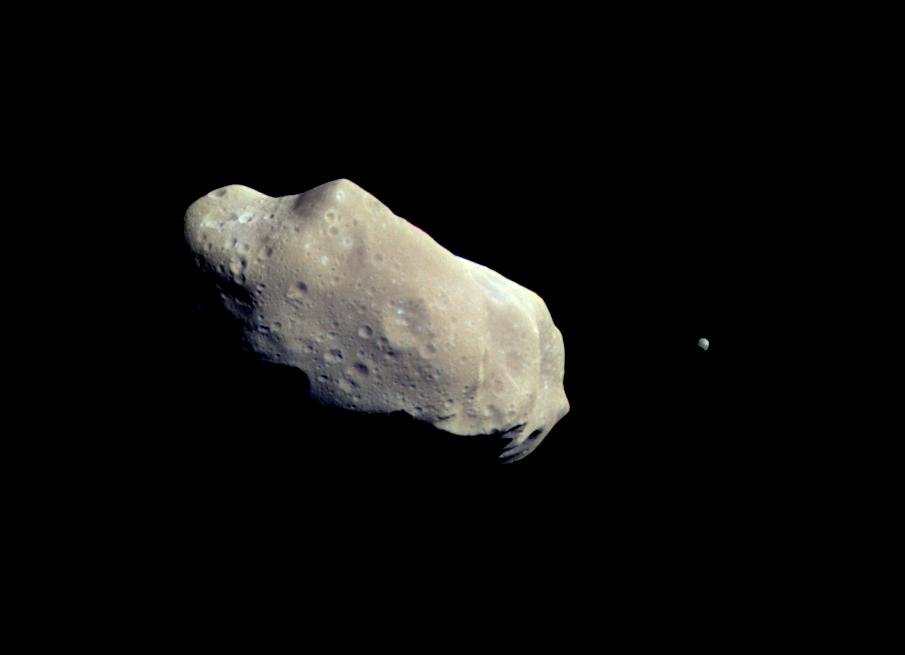 This color picture is made from images taken by the imaging system on NASA’s Galileo spacecraft about 14 minutes before its closest approach to asteroid 243 Ida on Aug. 28, 1993. The range from the spacecraft was about 10,500 kilometers (6,500 miles). The images used are from the sequence in which Ida’s moon was originally discovered; the moon is visible to the right of the asteroid.

About the Cover Photo :

Bennu and other asteroids represent building blocks of our solar system’s rocky planets.