“Markandeya consoled his parents saying that death was not a thing which wise people should dread. It is as natural as birth.”

Markandeya  is an ancient rishi (sage) from the Hindu tradition, born in the clan of Bhrigu Rishi. He is celebrated as a devotee of both Shiva and Vishnu and is mentioned in a number of stories from the Puranas. The Markandeya Purana especially, comprises a dialogue between Markandeya and a sage called Jaimini, and a number of chapters in the Bhagavata Purana are dedicated to his conversations and prayers.He is also mentioned in the Mahabharata. Markandeya is venerated within all mainstream Hindu traditions.

Today, Markandeya Tirtha, where the sage Markandeya wrote the Markandeya Purana is situated on a trekking route to the Yamunotri Shrine in the Uttarkashi district, Uttarakhand, India

Sage Mrikandu was leading an ascetic life in a forest along with his wife,  Marudhvathi. They were childless for a long time. Mrikandu performed intense penance  for several years in order to please Lord Shiva to have children. One day pleased by his great devotion Lord Shiva in all his splendour appeared before him and said “ I am pleased by your endless devotion, Ask from me any boon you desire”

Mrikandu was overjoyed. He prayed to Lord Shiva thus: “O Lord! I am childless. Grant me a son.”

The Lord said in reply, “Do you desire to have a virtuous, wise and pious son who will live up to sixteen years or a dull- witted, evil-natured son who will live long?”. The sage Mrikandu did not hesitate over the choice. He did not want a worthless son. He begged only for the short-lived son of whom he could be proud. Lord Shiva granted the request of his devotee and departed.

After some time Marudhvathi conceived and gave birth to a son. The parents were extremely happy about the new arrival whom they named ” Markandeya”. When Markandeya was – five, Mrikandu arranged for his studies. Even in boyhood Markandeya mastered all the Vedas and Shastras. His pleasing ways endeared him to his teachers and elders. The boy was liked by one and all.

When he reached the age of twelve, his parents arranged his Upanayana (sacred thread ceremony). He was initiated into the chanting of the mystic Gayathri Mantra. The boy was very regular in performing the Sandhya Vandana (a daily ritual performed) which pleased his parents and other elders. He was thus spending his days very happily, delighting everyone by his charming looks and pleasant behaviour.

But the parents were sad at heart and whenever they looked at their son a gloom spread over their face. They did not tell Markandeya that he was not destined to live long.

The sixteenth year was fast approaching. One day, unable to control their grief, they wept before him. Markandeya was surprised. He asked them gently the reason for their grief. Mrikandu, with tears running down his cheeks, said, “O my son! According to Lord Shiva’s boon you are destined to live only for sixteen years. How can we withstand this? We are helpless and do not know what to do.”

Markandeya consoled his parents saying that death was not a thing which wise people should dread. It is as natural as birth.

The next day the boy came to them and said, “Dear father and mother, do not worry for me. I am confident of winning over death. Pray bless me that I may succeed in my endeavour. Permit me to perform severe penance to please the Lord.” The parents blessed him heartily and sent him for penance.

Markandeya then took the blessings from his parents went into a deep forest to perform the penance, he did a great penance and the time was flying at greater rate.

Lord yama, the lord of death, knows the time has come to take back the soul of Markandeya and his life was to come to an end. He sent his servants to take the life of Markandeya, in spite of his great devotion they could not approach him for the radiation from him was too intense for them. They returned back to Yama and said that, they were unable to approach this young boy.

In vain of his powers, lord yama himself came on his wonted black buffalo with his pasam, the well- known rope with a noose for taking out the young lad’s soul from his body and carry it away. Yama saw the young devotee engaged in the worship of Lord Shiva. Yama could not let the worship be completed if his duty as the God of Death was to be properly performed.

As the Markandeya could not be allowed to live a minute longer after the completion of the sixteenth year. Normally invisible to human eyes, this time Yama had been forced to show himself to the young boy by virtue of the latter’s intense piety and devotion to God. Yama threw his rope with the loop and it went and encircled Markandeya’s neck and also the Shiva Linga. The young boy prayed to lord shiva, pleased by his great devotion, The Shiva Linga at once split into two and Shiva emerged in all his fury attacking Yama for his act of aggression. After defeating Yama in battle to the point of death, Shiva then revived him, under the condition that the devout youth would live forever. For this act, Shiva was thereafter also known as Kalantaka (“Ender of Death”).

Markandeya got the names Mrityunjaya and Kalakala.

Then, turning to the young devotee, with whose piety he was highly pleased, Lord Shiva blessed him with deathlessness. He said to Markandeya, “Every desire of yours will be fulfilled. You will never be old or grey – haired. You will live virtuous and famous till the end of the world. Omniscience will be an asset in you.”

As per the story of Markandeya, an excerpt from Bhagavatam 12th canto and 9th  chapter. 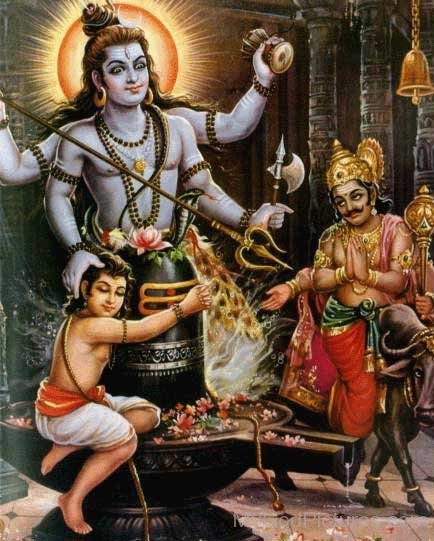 To this day, the Hindus reckon Markandeya as one of their immortals. It is said that Markandeya is a great Chiranjivi, one who lives with the body forever and whose body always appears young, beautiful and saintly on account of his yogic powers Markandeya has become proverbial for long life. The blessing of the elders even today is, “May you live like Markandeya, forever youthful and beautiful.”

Markandeya the author of one of the oldest puranas, called  Markandeya purna, this is one of the Puranas that lacks a sectarian presentation of ideas in favour of any particular god.  It is famous for including the Devi Mahatmya within it, the oldest known treatise on Devi (goddess) as the Supreme Truth and creator of the universe. The text is considered as a central text of the Hindu Goddess-related Shaktism tradition, with an extraordinary expression of reverence for the feminine.

The extant manuscripts of this Purana have 137 chapters, of which chapters 81 through 93 is the Devi Mahatmya. Tradition and some medieval era texts assert that the Markandeya Purana has 9,000 verses, but surviving manuscripts have about 6,900 verses. The text presents a diverse range of topics, with socio-cultural information and symbolism for Vedic ideas and metaphysical thought.

From ChandraSekharastakam, by the sage Markandeya,